This past week has seen the release of some interesting research in the UK and the USA as to the use and awareness of location based social network services. The two biggest of which are Foursquare and Facebook Places. Of the latter Facebook have stated there’s 800,000 Irish people accessing Facebook from their mobile, this group can also access Facebook Places, but the question is, are they?

Location based networks are controversial, mainly due to privacy concerns, do you want people to know where you are? According to research carried out by Microsoft 52% of their respondents (1,500 people based in Japan, USA, UK, Canada and Germany) “express strong concern with sharing their location with other people or organizations”. Sharing your location opens up a can of worms that can have serious repercussions, it could even raise the cost of your home insurance.

The Microsoft research into wider Location Based Services (LBS) such as GPS and weather alerts, released in January, found:

It must also be remembered the stat pointing to the value of LBS, is looking at usefulness in a wider context such as providing directions or local weather and not just in terms of ‘checking-in’.

This research was conducted in the UK amongst 1,000 peoples aged 11 to 18 year olds. Although conducted within a younger age group, this data also points to a general lack of understanding, a fear of sharing your location and low levels of use.

Out of those who had heard of location based services;

Beyond in the USA carried out this newly released research amongst over 1,000 consumers in the USA.

Of those who currently check in the reasons to do so were;

Of those who do not currently check in, the reasons they might check in would be; 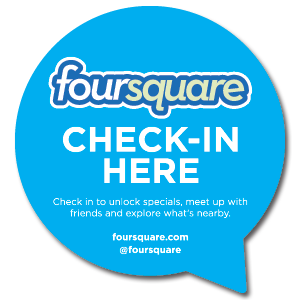 What it Means for Brands.

Although carried out in different geographical locations, and amongst different age groups there’s a few themes coming through;

This is a major concern amongst almost half of all respondents in all three surveys. Privacy on these networks is beyond the scope of brands and ultimately it’s down to Facebook, Foursquare et al. to remove these fears. However, given Facebooks general poor reputation (although it is trying to be more transparent) in the area of privacy and security it’s unlikely that these fears will be quashed anytime soon. In fact with Facebook being such a huge corporation there will always be a section of the population unwilling to share any data with it.

2. Lack of Understanding and Awareness

Whats the point in checking in? If brands can answer that question on behalf of the consumer this will help improve general understanding of these services. Same too with awareness, although this could be more of an adoption issue amongst users. There seems to be a lack of awareness of these services but Facebook Places only launched last summer in the USA, and it’s the best known service of the lot. Smartphone use will dominate the mobile market, so naturally over time, awareness and understanding will grow in this sector. However, if brands can’t answer ‘what the point is’ then neither will the consumer.

3. Facebook Places is by far the best known and most used

Although no official figures on how many people use Places, it is head and shoulders above its closest competitor – Foursquare. And that even includes in the USA where Foursquare had first mover advantage on Places. I suspect Foursquare may continue to grow, but will always be the marginal cousin to Facebook Places, unless they can differentiate their service. At the moment their better known for their game elements such as badges and Mayorships, but, according to Beyond, non-user simply don’t care about them.

The Beyond data points to discounts and offers as being the key motivational factors followed by meeting friends. A deal or discount will make people consider checking in, even amongst those who don’t currently check in. So these might help drive awareness and understanding. However, is the only way forward for brands to constantly offer discounts and deals? There’s so many deals and discounts of late we’re in trouble of being swamped with them. To the point where none stick out, and we only end up taking advantage of deals because we’re in the location already, or we’re a deal hopper and unlikely to return unless it’s with a deal – and it’s better than a deal offered by a rival! Deals and discounts aren’t long term strategies for brands will need to look for other ways of utilising location.The most obvious being an exclusive product/item/service only available to check-in’s, and make it a group activity based around friends. Something like this has no real monetary value and the overall brand isn’t damaged.

There’s a lot of negativity here, but in the long term location based networking is going to grow – as people see more benefits in using the services. I remember some of my friends being uneasy about using the likes of Facebook in the beginning, but that was because they just didn’t see the point. All it takes is that moment when the penny drops, and it would seem from this research we are not there yet.