Twitter isn’t the most obvious platform for marketers to engage in. The 140 character limit is probably the biggest stumbling block. It’s restrictive and requires marketers to be even more creative in how it’s used. The attraction of Twitter is it’s realtime connection, it’s people online right now, which could also prove daunting. Dealing with a realtime online audience removes a lot of control from the side of the marketer. But one thing the recent post on Irish Social Media statistics shows, is the rapid growth in the use Twitter in this country. More people are flocking to Twitter and I’m noticing more and more old accounts, that have been dormant for a year or two, coming back to life in recent weeks. Perhaps the media coverage over the UK Superinjunctions is demonstrating the role Twitter can play, and in doing so demonstrating the value in Twitter. These older posts Twitter Marketing in Action and More Twitter Marketing Campaigns may also be of interest.

For inspirational purposes, here’s the best 15 Twitter marketing campaigns – ever!

Ben & Jerry launch a Twitter application to promote Fairtrade Day on May 14th last. The app will turn your unwanted Twitter characters into a message promoting the day.

From Brazil, a fridge that automatically tweets a message when opened. Bontafont in Brazil wanted to remind workers to drink at least the recommended daily amount of water and so sent a fridge to one of their most influential tweeters. The fridge tweets when opened. Each tweet, leads users to a website promoting the importance of keeping hydrated. If the fridge isn’t opened it tweets it’s owner reminding them to drink some water. Once a month a new personality joins the campaign and receives a tweeting fridge. Believe it or not this isn’t the first tweeting fridge either; this one reminds its owner how much milk is left and this one from Samsung has a number of apps including Twitter. But these aren’t the first inanimate objects to be given a voice through Twitter either. I found this Tweeting Bar, it’s more of a tweeting bar tap, from 2009.

I featured this last year, but it’s worth including as it demonstrates a way of using Twitter to drive sales. Instead of putting up a boring holding page while their new website was being developed, Uniqlo held a sale. 10 items from their online store were displayed and the more tweets each item received the lower the eventual price was. Some items went for as much as 50% off.

This is very unusual, a Twitter campaign integrated with a 10km race in Argentina. Who follows who? Do I follow you on Twitter or do you follow me? Let the Nike 10km race decide.

There’s a number of similar campaigns to this operating in Ireland at the moment where people are suprised with some sort of gifts. People will always appreciate a gift, especially if its a prize. But this Vodafone campaign from 2009 puts a spin on that. Two people are filmed on a Dutch street, broadcast live on a website and viewers vote who should receive an upgrade by tweeting. Gifts are given to the winners right away. Not sure how filming unsuspecting people on the street and broadcasting it live might go down, but if you got a decent gift out of it you might be ok about it. 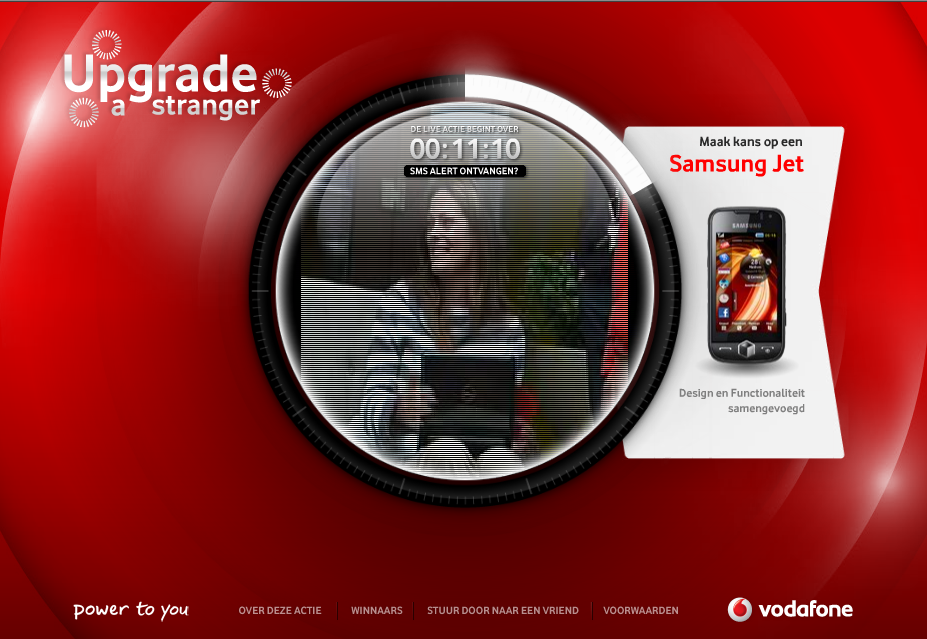 Orange is one of the most active brands in Twitter, with regular competitions and games for their followers. The Singing Tweetagrams (video blow) has been featured here before, but more recent campaigns have been #MyRoyalPlate to tie in with the recent Royal wedding the best tweets with the hashtag would be turned into commemorative tweets. Tweeter’s who included the #WinterWarmer hashtag could nominate friends to receive  hot chocolate and scarves from Orange.

Uniqlo developed a ‘virtual line’ to celebrate it’s 26th birthday. Every 26th person to join this virtual line would receive a voucher worth around 10 euros. Over 15,000 Twitter users joined the virtual line on May 25th, this increased to 60,000 by day two and even further by the end of the 4 day campaign – the brand was also a worldwide trending topic during this time. This campaign was extended to China and Taiwan late last year. In Taiwan the virtual line reached a peak of 640,000 users!

A promoted trend #ifihadsuperpowers asked users to submit a photo of themselves holding their hand out to camera. Radioshack would then put a cape and mask on each person and send the photoback. Some even picked up Radioshack related prizes.

Twitter content promoting Canada was broadcast on interactive murals in the USA. This was to promote Canada as a holiday destination to Americans.

When you consider the dynamics of this campaign, 140 characters can pretty much do anything. This was a race between 4 teams who embarked from different locations, and their Mercedez Benz vehicals were powered by tweets. Each tweet would power their car 1 mile, while their location was followed in realtime on a microsite. Watch the end of the video for some really impressive stats on the campaign.

The third entry for the fashion retailer in the top 15, but they keep coming up with interesting ideas on how to integrate Twitter into campaigns. This campaign was to promote their new line of Tee’s. It’s quiet straightforward – it pulled tweets from your timeline and put them into a music video. It could be executed a little better and towards the end it does become more of an advert for the brand. The first twenty seconds of this video are blank.

This had to be included at some stage! Old Spice replies to invdividual tweets by video. You can see all the Youtube messages here

Live artwork that features profile images of twitter users who have tweeted the hashtag #DontTellAshton. The size of the profile pic in the overall artwork depends on how many followers that person has. So the more followers you have the larger you feature. Of course if Ashton is told about this, he could ruin it by joining in and because his number of followers is so large he would feature so prominently. The campaign video is below, the website is here, and they even presented the finished project to Ashton last June

To communicate how easy their furniture was to assemble Brazillian furniture store Tok & Stok condensed their instructions to just 140 characters, including a link to a diagram. Consumers just have to search for the hashtag to their item and follow the really simple instructions. It’s a great idea, but the profile, launched in March only has 136 followers. This kind of highlights the flaws in Twitter, the account is static so no new information will be added, so is there any point in following the profile? But without many followers the campaign looks like it hasn’t been successful and there’s no way of knowing how many people have viewed the account and used the instructions. The closest measurement will be checking to see how many clicks the diagram has had. On its own 136 looks like the brand don’t know how to use Twitter, but their official Twitter account has over almost 14K followers, so obviously they do, just no one will follow a static account.