It’s that time of the year when end of year lists begin to populate websites, blogs, newspapers, magazines, radio, tv shows. Here’s a list of all those end of year social media lists that a look back to the highs, lows and most discussed topics and brands of 2010.

Facebook’s Memeology study looked at the most used terms in status updates over the year. Little surprise that global events and entertainment featured highly. The top 10 most popular subjects were;

2. World Cup – The start and finals of the tournament garnered 1.5 and 1.3 million mentions respectively. Amazingly 50% of all updates, at key points in certain games, were related to the World Cup.

3. Movies – “Toy Story 3,” “The Twilight Saga: Eclipse,” “Inception,” “Alice in Wonderland” and “Iron Man 2” were the big moves discussed. Data from midnight Toy Story 3 screenings show that most mentions occur 30 minutes after the film has ended – when people have had the time to get home and share their thoughts.

4. iPad and iPhone 4 – garnered 25 million mentions over the year both good and bad.

5. Haiti – spikes in first hand accounts of the earthquake occured just 4 minutes after the quake hit. The next day the world was discussing this terrible tragedy at a peak rate of 1800 updates per minute.

6. Justin Beiber – unknown in these parts in 2009, Beiber’s traffic hit a peak in September at his MTV music awards debut.

7. Games – a hugely popular part of social networking is gaming and the biggest trending phrase was ‘bran raising’, from Farmville of course.

8. Miners – when the Chilean miners were rescued, Facebook experienced 33 spike sin updates. One for each of the miners.

9. Airplanes – the surge in use of the word was due to the song of the same name.

10. 2011 – Any surprise that next year is a popular mention, not when you factor in all the plans for the coming 12 months people have such as holidays, births, weddings. As the end of 2011 draws closer, its use in status updates is only increasing.

Contagious released this presentation on the emerging trends and technologies in 2010. It’s a lengthy but rewarding read that covers online campaigns, virals, gaming, TV and a whole load more.

Twitter analysed over 25 billion tweets in 2010 to produce this list of its top trending topics. Slightly different to Facebook’s list, it still includes a mix of news events, sports, movies, music and an octopus!

Google’s round up of search trends over the last year. You can also access archive Zeitgeist’s going back to 2001 here.

This list sums up not only the most powerful tweets of the year, but also how Twitter has become an indispensable source for news and information. The full list can be viewed here, along with some striking images. If a picture paints a thousand words, then a tweet can certainly claim to paint more than the sum of its 140 characters. The list includes tweets from world leaders, celeb’s, sports fans as well as average joe’s. Look beyond just the shortness of the tweet, examine it’s context and take away an understanding of each scenario – in many of the ten listed cases they are from situations most people will never experience.

The video network shares its most watched clips of 2010 in one 86 second clip.

There’s nothing like an infographic to neatly pack a lot of statistics into a visually appealing graphic. 2010 was a year that you could find an infographic for just about everything, especially anything related to social media. This Top 10 is compiled by the guys over at Viralblog. 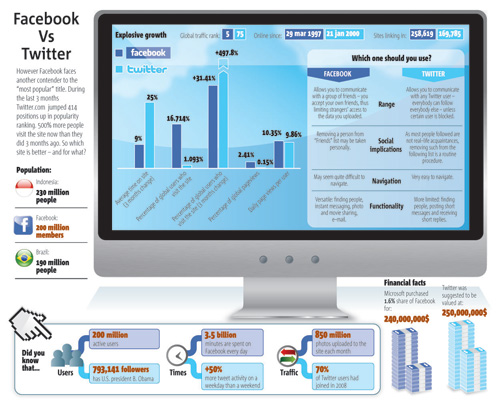 Social media blog Mashable posted their own list of innovative viral videos. All the best of the year were there Old Spice, Puma hardchorus and this one, one of my own personal favourites;

The official Youtube list of brand virals doesn’t differ too much from Mashables list, all the main ad’s of the year are there. Let’s finish on a high note.