Bands and music artists practically wrote the rules on how to use social media for marketing and there’s a lot we can learn from how they operated. Yesterday I wrote how Myspace was a critical point in the evolution of marketing on social networks and this post also explains why. 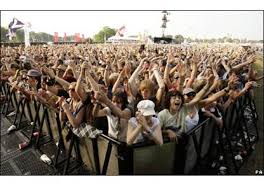 Myspace wasn’t the first social network that facilitated the music community promote gigs and events. People were doing this on its much larger rival Frienster. But the owners of Friendster didn’t want people promoting gigs and began to clamp down on this activity. The Myspace founders identified the opportunity to serve the music community, and the rest is history.

The Myspace opportunity was simple – to connect music fans (customers) with the music (products) they liked. Bands provided tracks, music clips, blogs, photo’s and videos (content) to keep fans entertained and informed (engaged), and as a means to build the personality of the band in order to attract new fans. The point in attracting new fans was very clear, more fans provided bands with a bigger audience who would hopefully buy cd’s, mp3’s, tickets and merchandise (products). What was also an important element in all of this was the reduction of the role of the record labels. The labels were traditionally what stood between the band and the audience. Record labels did this by controlling the distribution and marketing network that connected the band and audience. Whereas Myspace helped bands access the distribution and marketing network for themselves.

The very same process that Myspace helped establish is in operation today. The record label in the marketing world was traditional media – including TV, radio and print. It controlled a large part of how companies could market to their audience. But the advent of social media has reduced the role of traditional media. Social media marketing using Facebook, Youtube, Twitter, Blogger, WordPress and countless message forums are giving greater tools to marketers to create a higher level interaction with the consumer. This interaction is through text, audio, images, videos, games and applications – which is also helping to develop the personality of a product or service.

Bands have always had fans, but a confusing point for companies and social network marketing is the concept of products and services having ‘fans’. Why would a person be a fan of a chocolate bar, a hotel or their local pub? For exactly the same reason they are fans of bands – because they feel some sort of connection, albeit with an inanimate product or intangible service. The connection might come through a funny advert, having experienced outstanding customer service or because its where they like to spend their Friday night. These connections are being cultivated all the time by companies and social media allows for these to be capitalised on.

Social media marketing started out with bands and music, then included films and games, marketers saw the opportunity and before too long consumer goods, products and services were beginning to pop up on social networks. All using the same strategy the bands had used before them.